As we did last year, Financial Symmetry has covered several current events on our blog throughout 2014, and here are what we think the Top 10 Economic Stories of the Year have been: 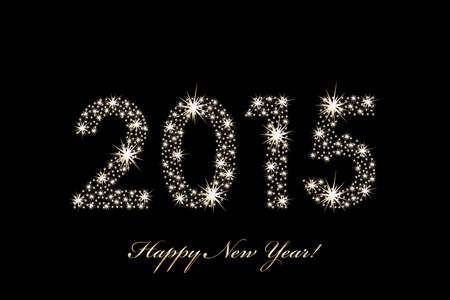 There are few issues that so clearly define winners and losers like the price of oil.  Consumers have received an unexpected gift at the gas pump and grocery aisle.  The effect is already showing up in increased consumer sentiment that is at its highest level since before the Great Recession.  Globally the falling price of oil is hurting developing economies that rely on oil and gas production.  Here in the U.S. the shale oil boom made possible by fracking may be over unless oil prices return to a level that justifies the expense of extracting oil from rock.  Stock markets have reacted negatively as falling oil prices indicate uncertainty about the health of the global economy.

In 2014, Russian President Vladimir Putin achieved historically high public opinion ratings despite driving his country into a ditch.   At the beginning of the year, the Sochi Olympics were a source of pride for the Russian people and provided a positive public relations show for the world. But before the glow had faded, Putin destroyed all the good will by invading Ukraine and annexing Crimea. The world reacted with sanctions, and towards the end of 2014, falling oil prices added another blow to the Russian economy. The reality is that Russia’s economic success over the last decade was due to high oil prices, which masked corruption and poor financial management. Putin knows how to distract Russian’s citizens from the reality (at least in the short run)- suppress free speech and wave the flag.

There’s a good chance you were exposed to an Ebola story at some point this year. There was no shortage of media coverage on the subject as TIME magazine even named the Ebola worker the “Person of the Year.” As with most media scares, the reality did not live up to the fear.  As of this writing, there have been 10 total cases of Ebola confirmed in the US with 2 deaths.  In comparison, ordinary outbreaks of the flu or car accidents kill tens of thousands of people in a year.  Every year seems to bring a fresh crop of fears and media hype, the challenge is to keep the facts separate from the emotion when evaluating how to react.

Every election there are prognostications of expected outcomes and potential impacts on the stock market. It was no different this year, as the Republicans were expected to pick up seats in the House and Senate which was confirmed on election night.  It will be the first time since 2006, the Republicans control both houses of Congress.  Of course the White House is still Democrat leading to presidential gridlock as opposed to the congressional gridlock we’ve had the last few years. While it’s interesting to look at historical market moves after elections, there are many factors that impact the movement of markets.  This is why we continue to stick with a disciplined, diligent, and research-based strategy for our investment decisions.

In shocking news within the investment community ​Bill Gross resigned from Pimco in September, a firm he founded in the early 1970’s.  He is best known for running the Pimco Total Return Bond mutual fund which is the largest bond mutual fund in the world. The last year was not easy for him as his hand picked successor, Mohamed El-Erian, resigned, his flagship bond fund did not do as well as it has in the past, and the SEC investigated a bond ETF (BOND) he ran.  At FSI, we often use mutual funds run by teams vs. one individual, and Pimco Total Return mutual fund now has three main managers with over a hundred sub-managers focused on different areas of the bond market.

Sensitive consumer information was compromised at several major retailers over the course of the year.  60 Minutes recently dubbed 2014 as “the year of the data breach.”  While the data breaches are concerning, it is important to remember that there are still advantages to using credit cards over other forms of payment.  It is also important to protect yourself from other potential sources of fraud this time of year.

To many, gold is thought to be a great investment and store of wealth. 2014 demonstrated that it is not always so.   As can be seen from the chart below, the reality is that gold has tended to have sharp increases in price, as happened from 1977 to 1980, and more recently from 2002 to 2011, followed by sharp declines and then many years of relatively flat prices.

We’ve now had five and a half years of double digit average annual gains in the US stock market. For many investors this outcome was hard to imagine in the depths of the Great Recession. Fear dominated and the future looked bleak causing many investors to sell stocks at the wrong time.  At this stage of the market cycle fear is often replaced by greed as investors who have been sitting on the sidelines begin to feel more confident about stock returns and reenter the market.  Unfortunately a prolonged rise in stock prices warrants caution as future returns will be less impressive than the last five years.

As the US economy gro​wth begins to accelerate the opposite can be true of Europe.  With current and expected real GDP growth of approx. 0-1% it is teetering on another recession and potentially deflation.  What is driving this​?  Banks have continued to de-lever since the 2008 financial crisis, there is still no mechanism for cross border fiscal transfers like we have in the United States, and the central started tightening monetary conditions prematurely in 2012.  As the chart below demonstrates, monetary policy has remained constrained since the financial crisis with US and UK economies performing much better with a more accommodating central bank.

That being said there are a few bright spots going forward including a weaker currency, falling commodity prices and cheaper equity valuations should help businesses and consumers in 2015. 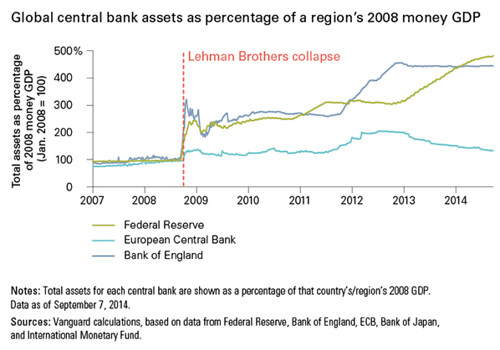 Immigration policy has been a part of our national discussion since the beginning.  In recent years however, there has been little movement from Washington DC given the heated debate on both sides of the aisle.  President Obama recently signed an executive order that halts deportation on approximately 5 million undocumented immigrants.  Not surprisingly Republicans have angrily denounced Obama’s decision as illegal and will most certainly revisit this issue when Congress is in session after the New Year. There has already been a ruling at the U.S. District court level declaring Obama’s actions unconstitutional.
Copyright: yuliaglam / 123RF Stock Photo