Since index investing in the stock market was invented, its popularity has risen and fallen in cycles that closely match bull and bear markets.   In 2014, stock index investing’s popularity surpassed its prior peak from 2008 and is thus flashing a caution sign.

It’s easy to see why many get caught by the index investing trap when you consider that many investors tend to chase past performance.   The following table demonstrates that at index popularity peaks, the prior three and five year’s performance looked good.   However, those same investors that chased indices were likely disappointed by the following three and five year returns.

It is possible that index investing could become even more popular this year which could mean that the most popular indices like the S&P 500 could have another strong performance year in 2015. However, we invest based on the outlook for the coming three to seven years which is why we are underweighting US stocks. 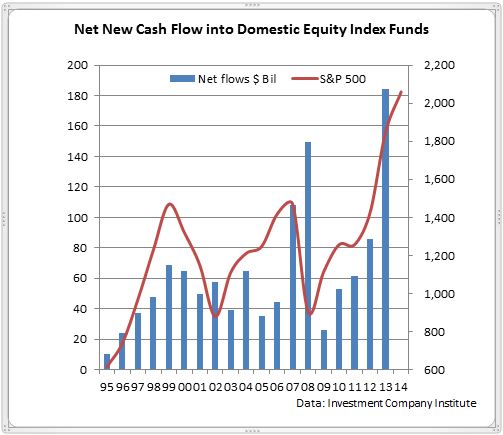 Why Should You Diversify?